Noise
Immerse yourself in the presence of your loved ones.

In my Interface Design course, we were tasked to create a system of IoT devices that improve the well-being of individuals at home.

For this project, I worked with a team to identify opportunity areas by holding in-depth-interviews with teens who grew up in split family households. We focused on ideating concepts that were discursive and speculative in nature. I contributed significantly to the design research and interface design steps.

As a team, we were drawn to the space of children and teens from split-family households. This problem space is also relevant to friends who are living in different cities from one another or a doctor working night-shifts away from their family. 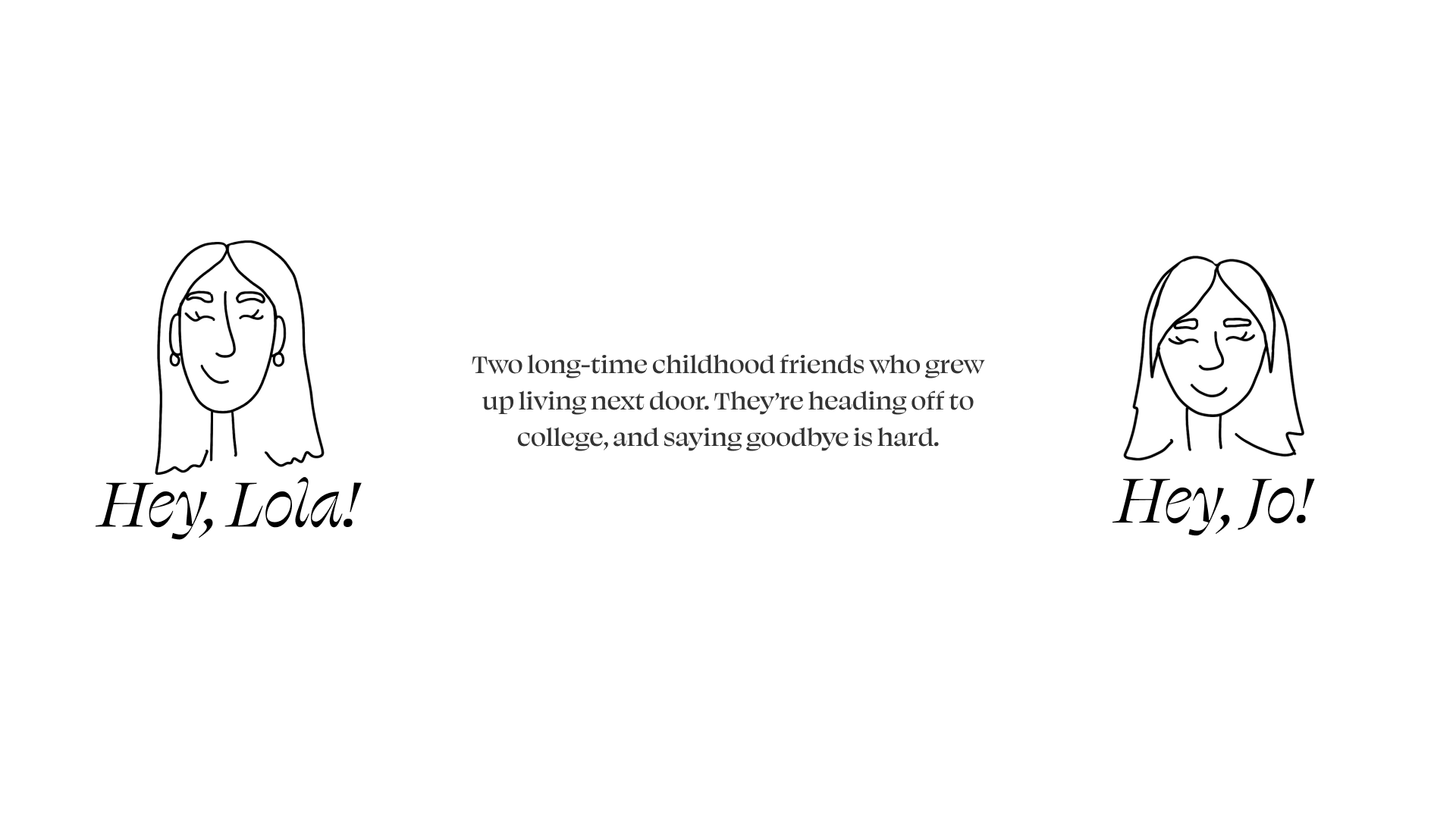 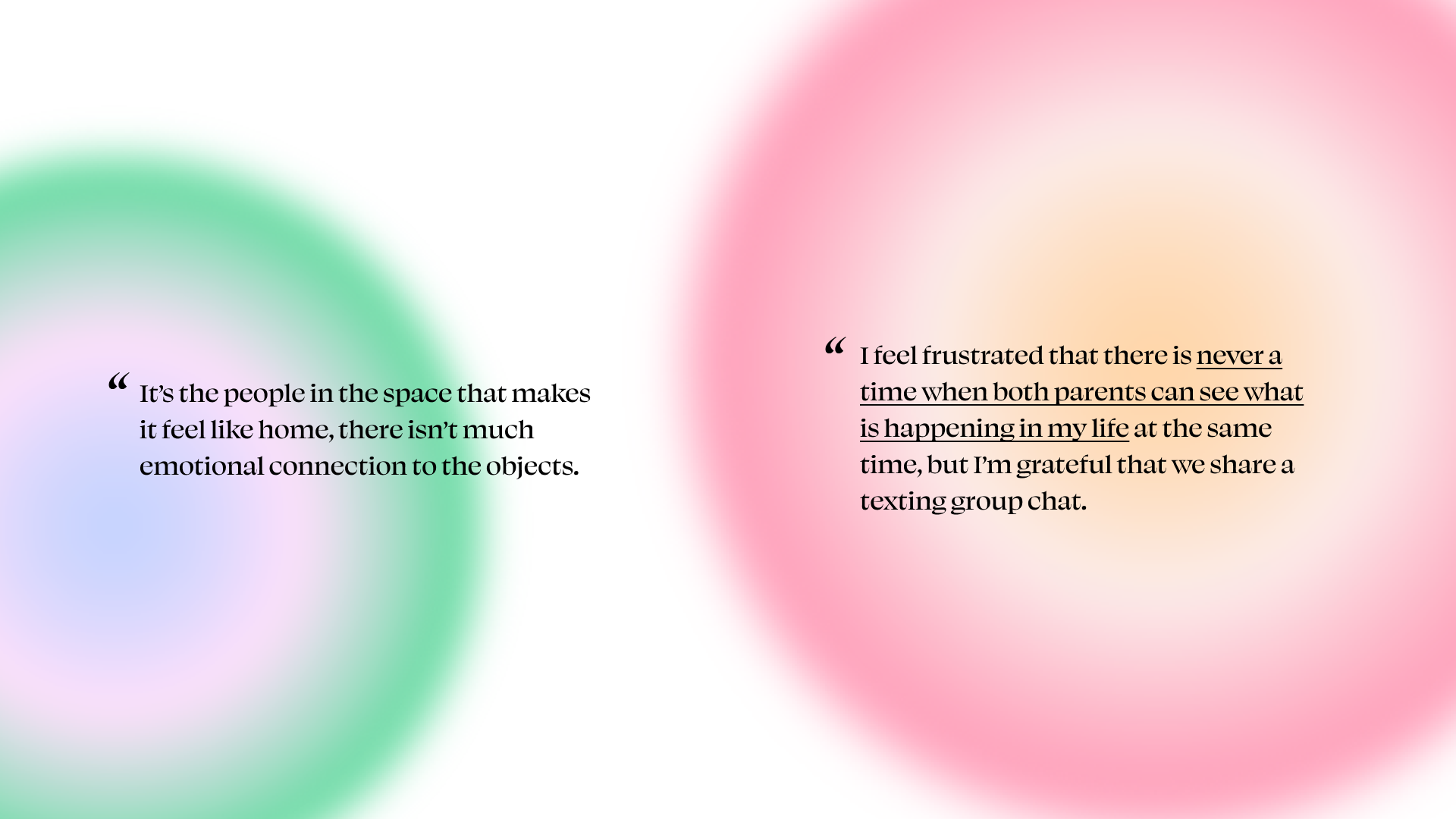 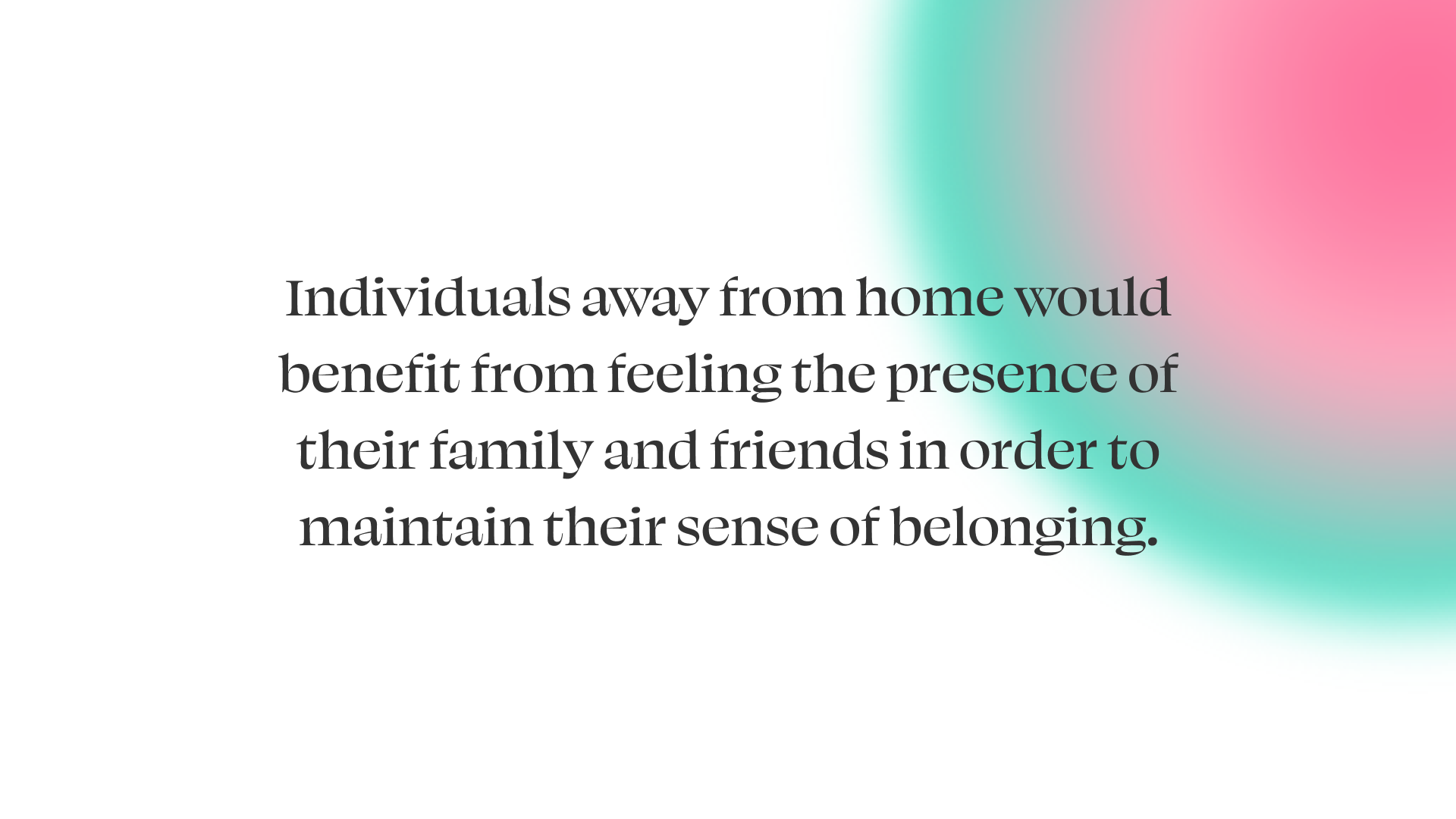 Based on our findings from our in-depth-interviews, we formed 4 design principles that summarized the user needs. These guiding principles set us up for our ideation process where we brainstorm concepts that encompass these values. 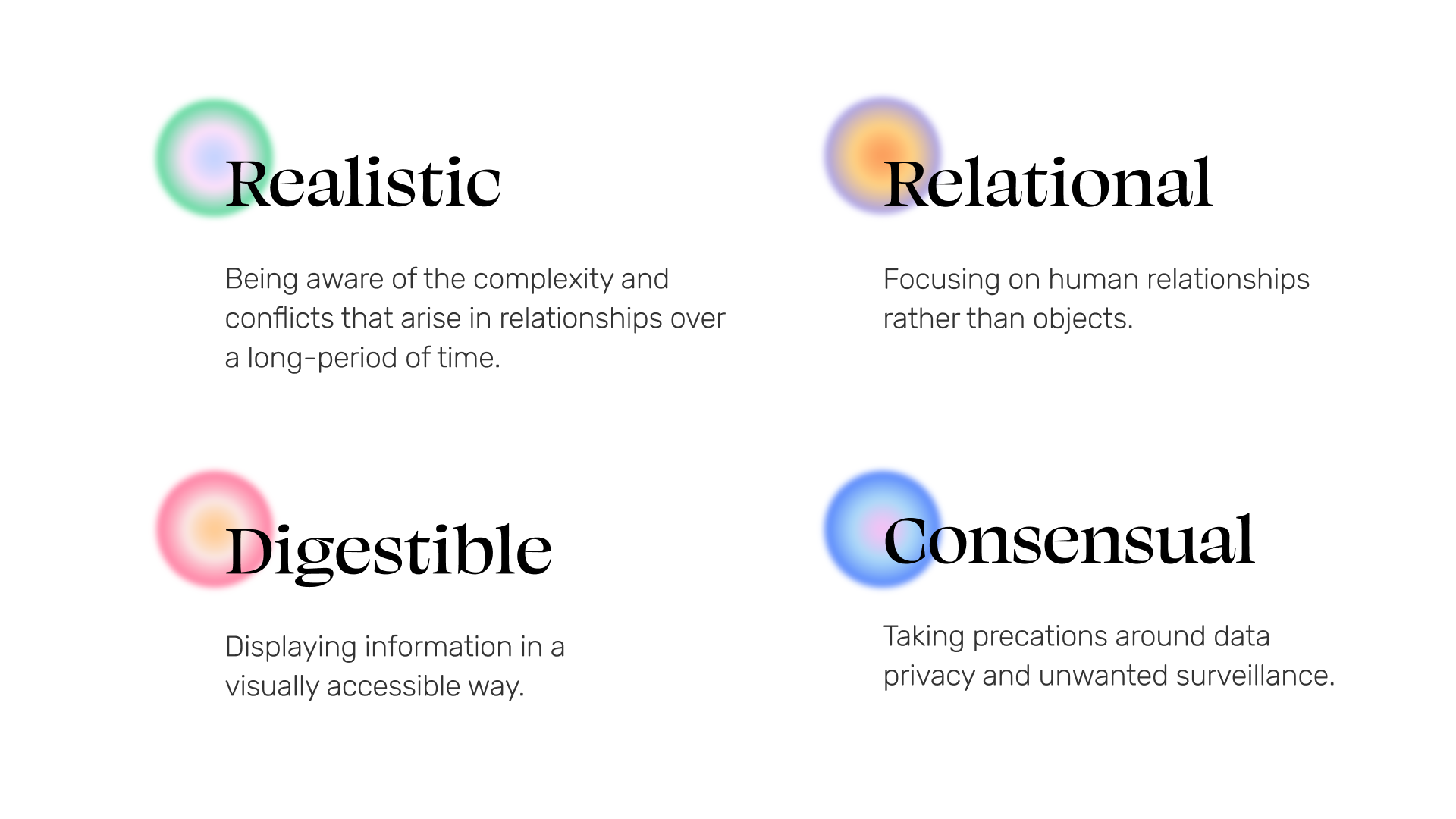 By not initially focusing on practicality or feasibility, we were able to consider alternative forms for fostering human connection. 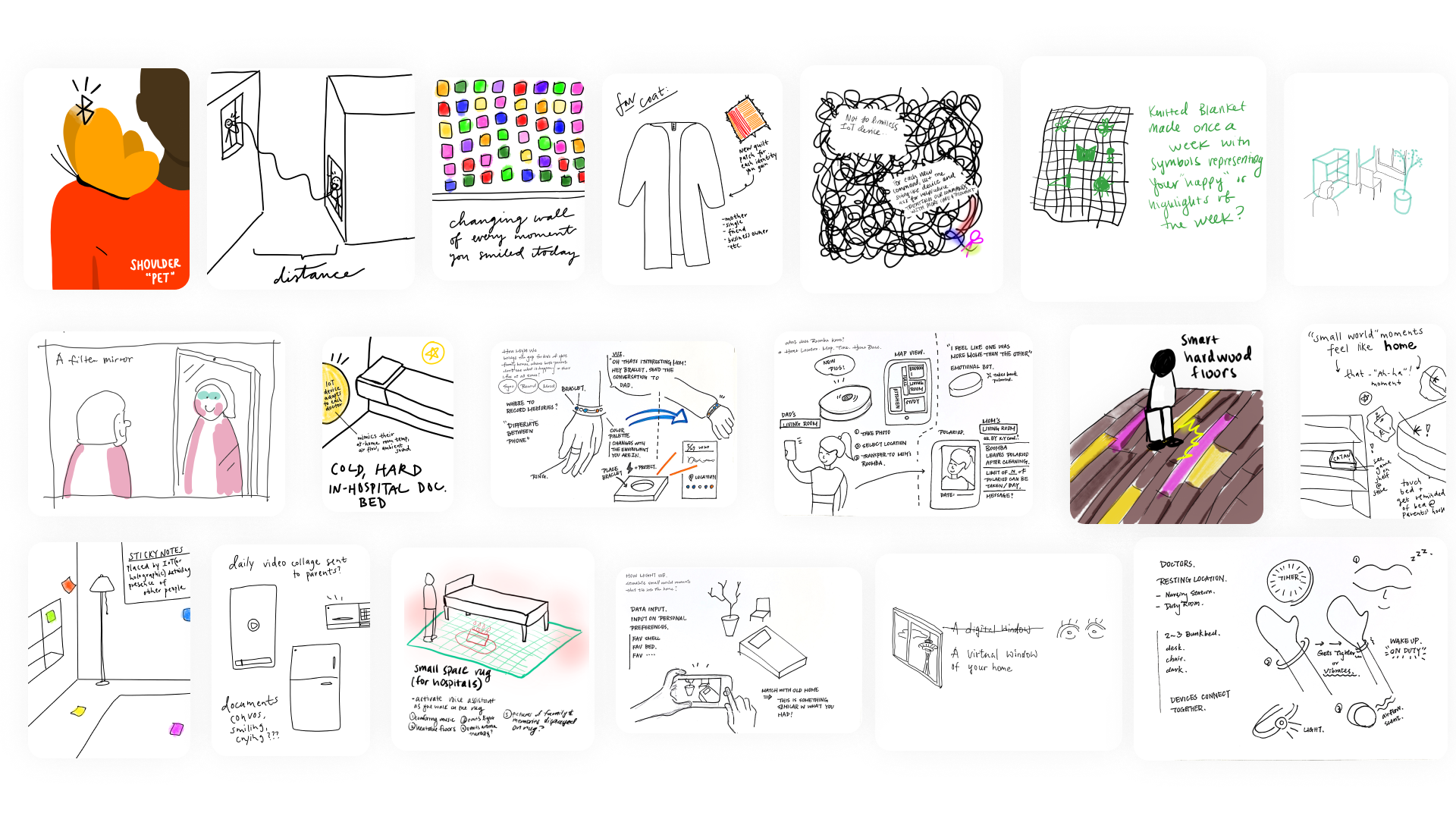 I led the effort to work through the mental mind map for the device ecosystem. There are multiple devices in different households that all need to connect. By creating visual mind maps, we were able to storyboard how each household would set-up their devices.

Our main challenge was to create a system of devices that did not allow unwarranted surveillance. In the scenario of split family households, the child and individual parent may only want to view each others' presence. As a result, we designed multiple iterations of how we might visually represent someone's motion while still concealing their identity.

Part of this assignment was to imagine the future possibilities of IoT devices. We brainstormed ways motion could be detected across spaces. Rather than having multiple motion detectors places in each room, the choice to use a household's existing Wi-Fi network helped us consider what may be possible in the future. 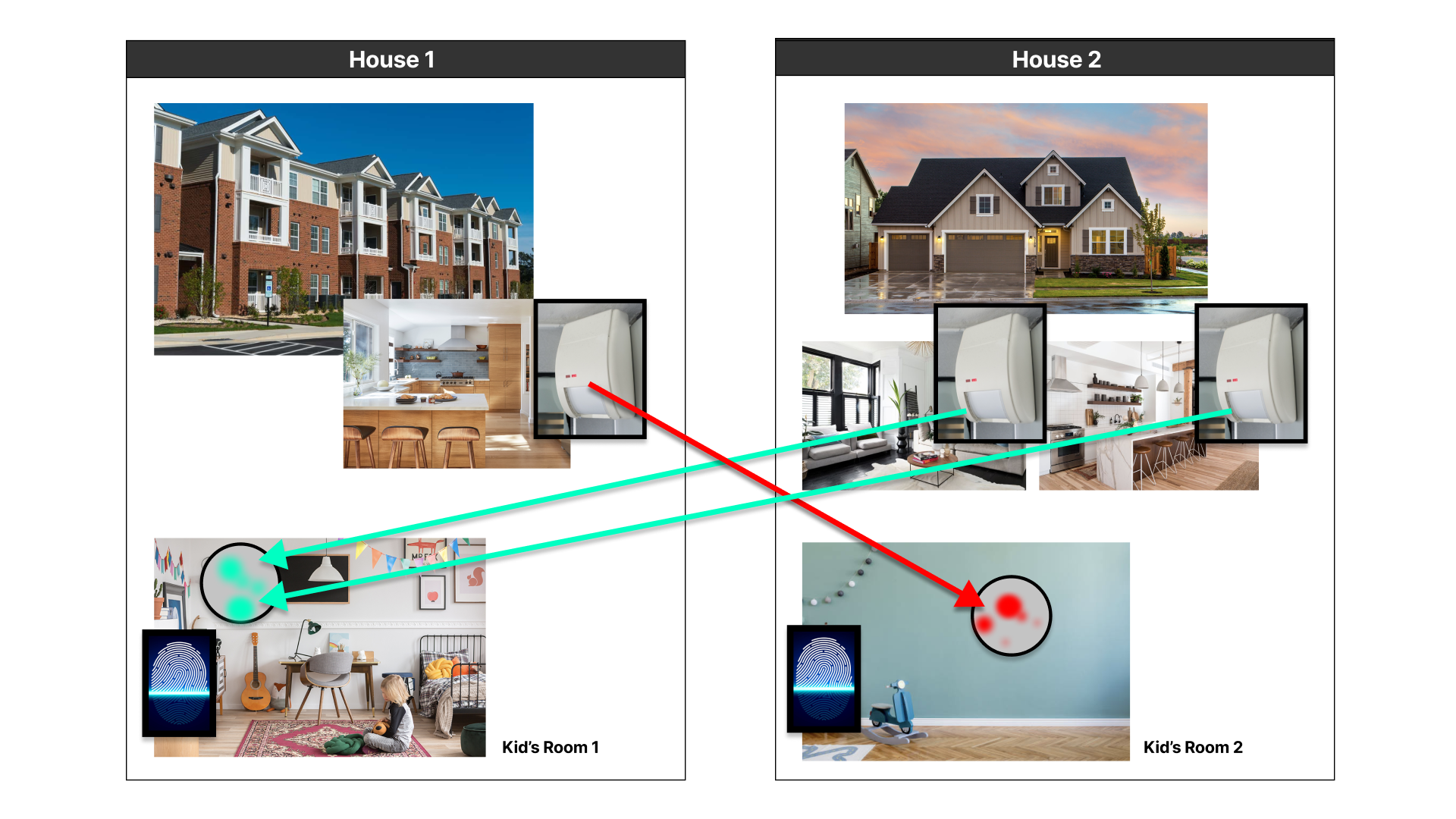 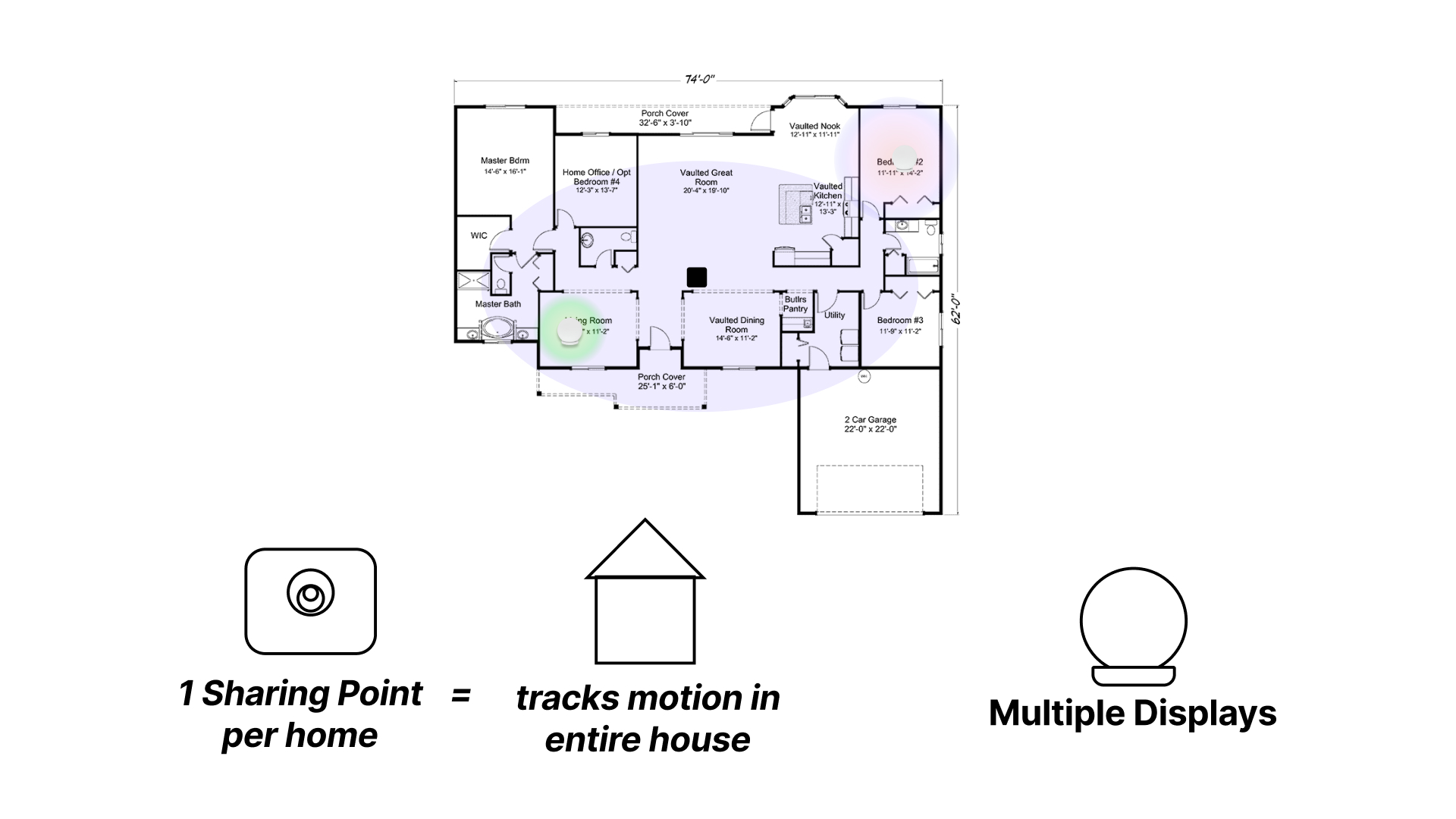 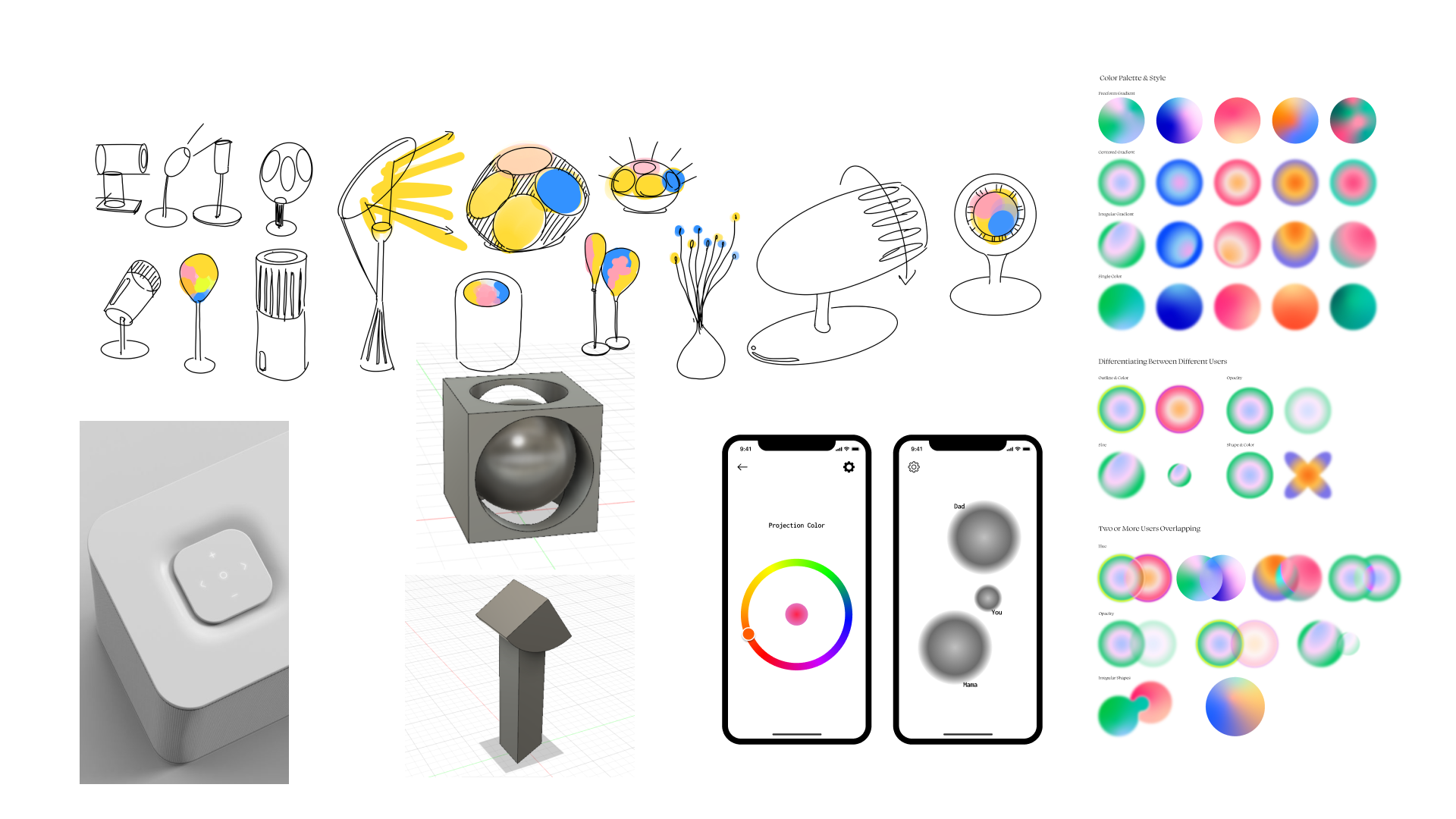 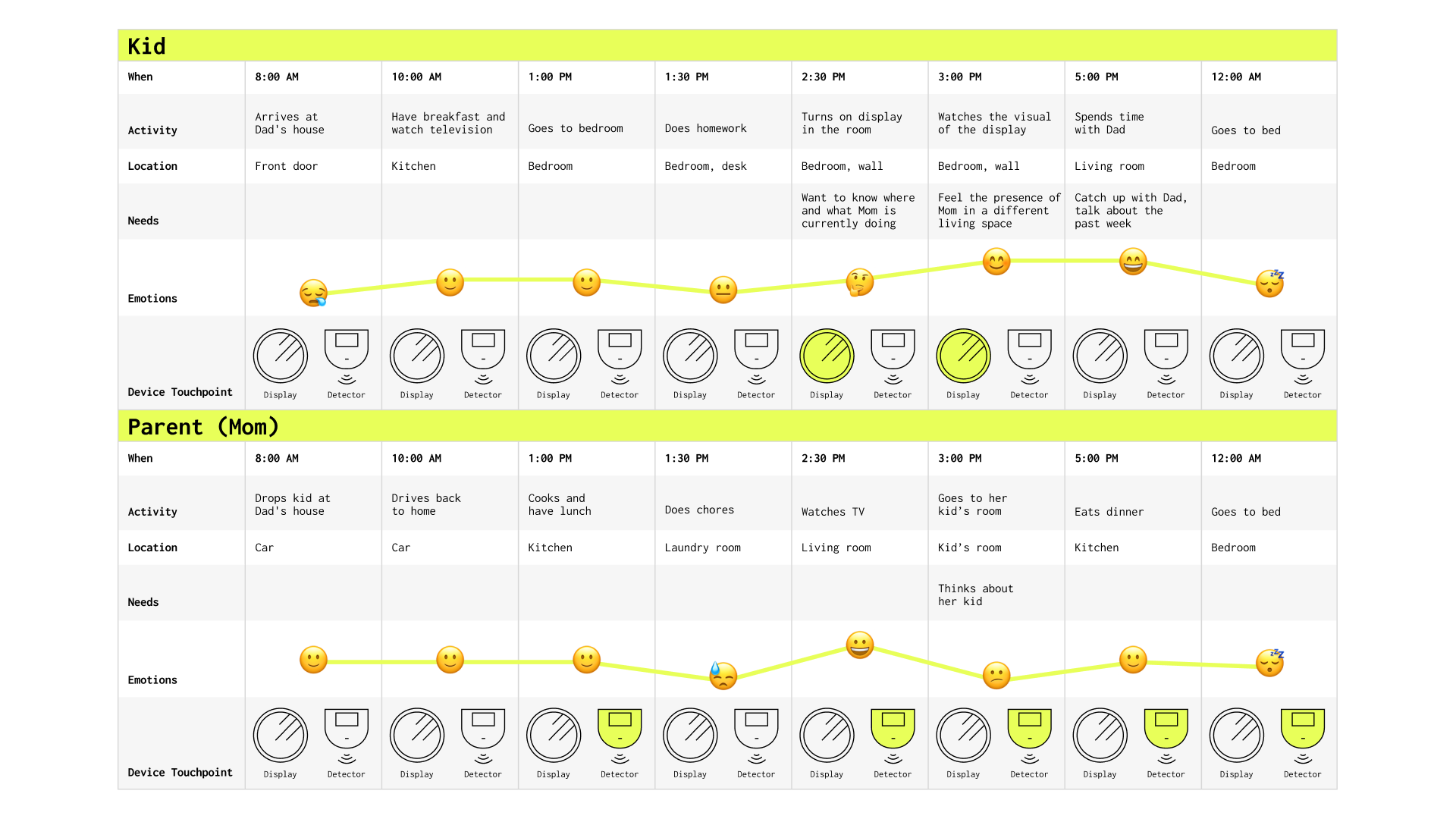 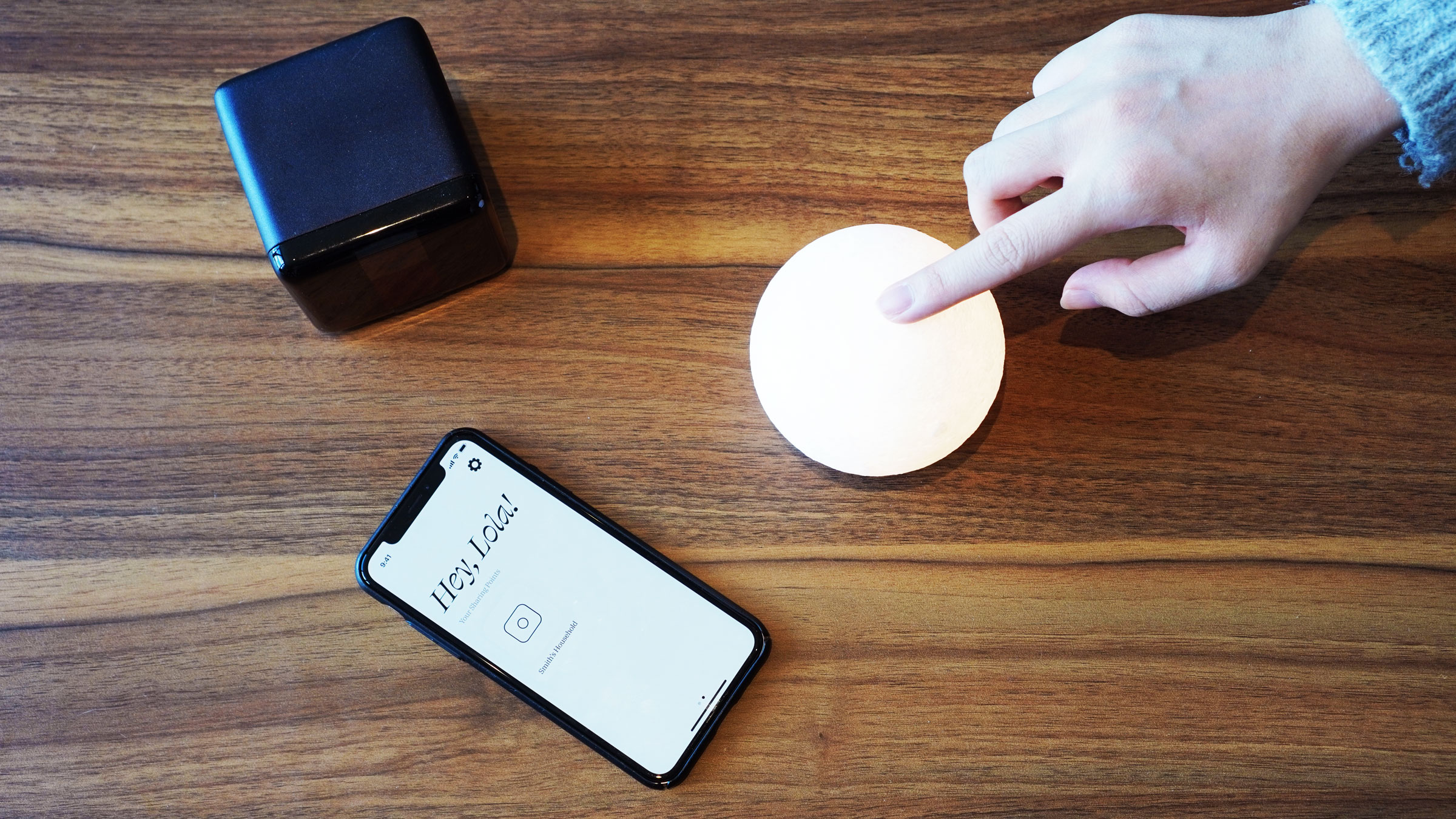 Everyone can have their own Noise device. It projects an abstracted visualization of the motion data captured from Sharing Point devices at your connected households.

View their motion when you miss their presence. Noise allows you to immerse  yourself in the visual white noise made from the motions of far-away family and friends. Later, when you have time to connect in real-time in person or on the phone, talk about what you discovered. 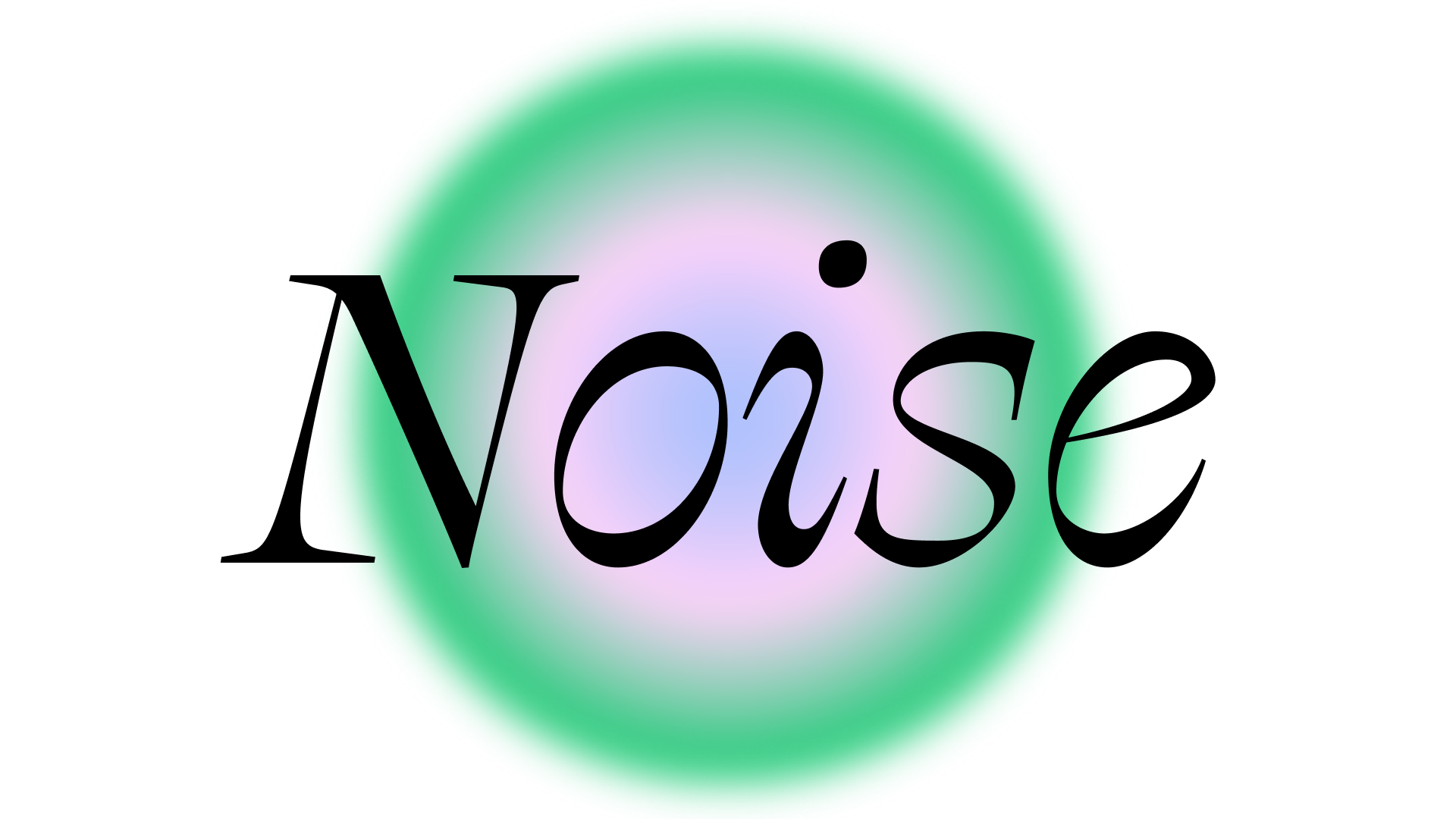 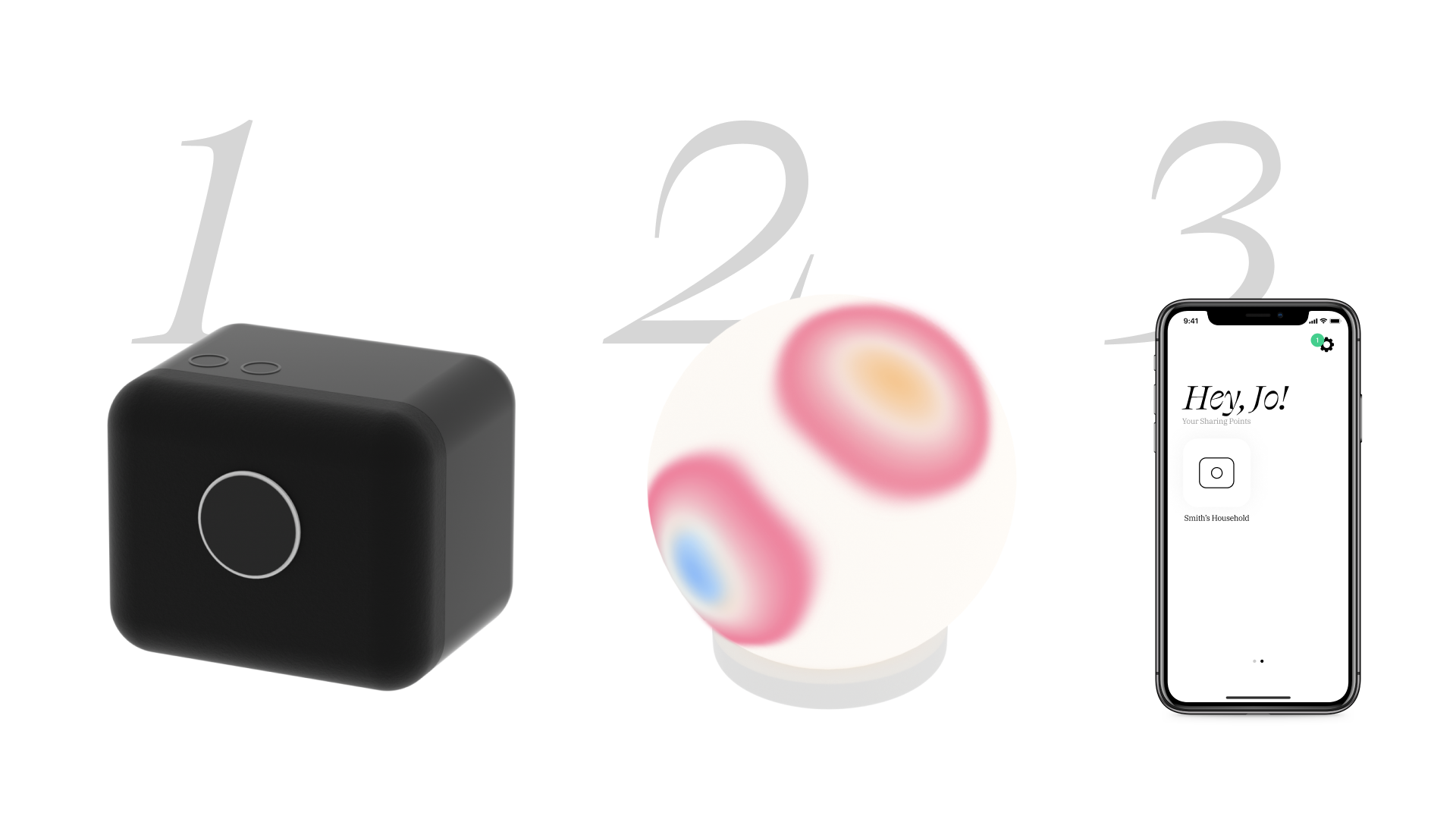 Each home has one motion detector that picks up motion data across the span of their Wi-Fi range.

To limit the number devices in each household, only one Sharing Point device is needed. The Noise App allows users to manage security settings for who can access the Sharing Point network. 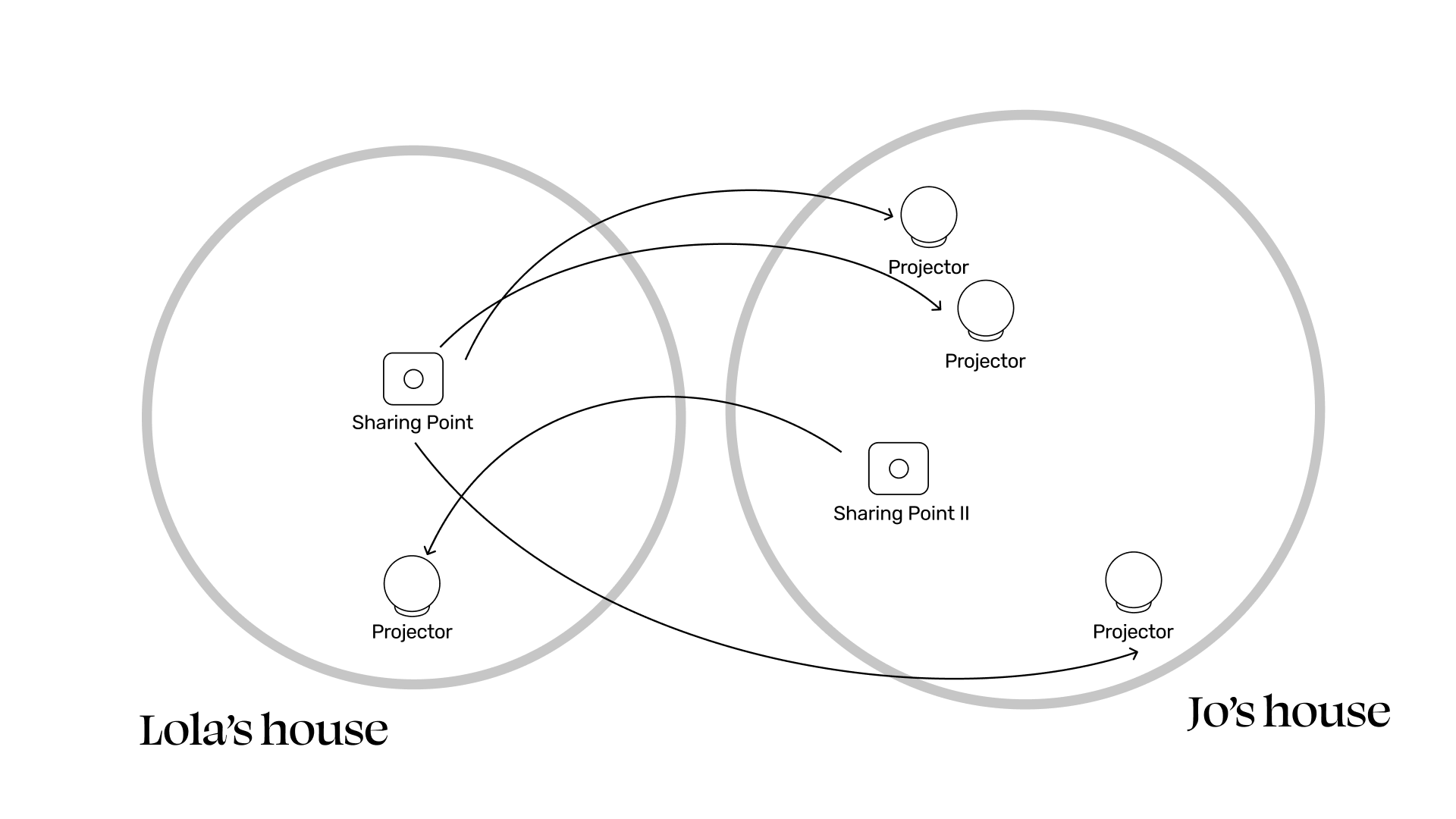 Households can have as many projectors as they would like — each can be connected to varying sharing points.

The visual design of gradient blurred circles are an abstracted representation of someone's motion being detected. This abstraction lacks accuracy and precision which is intended to prevent unwarranted surveillance of someone in another household. 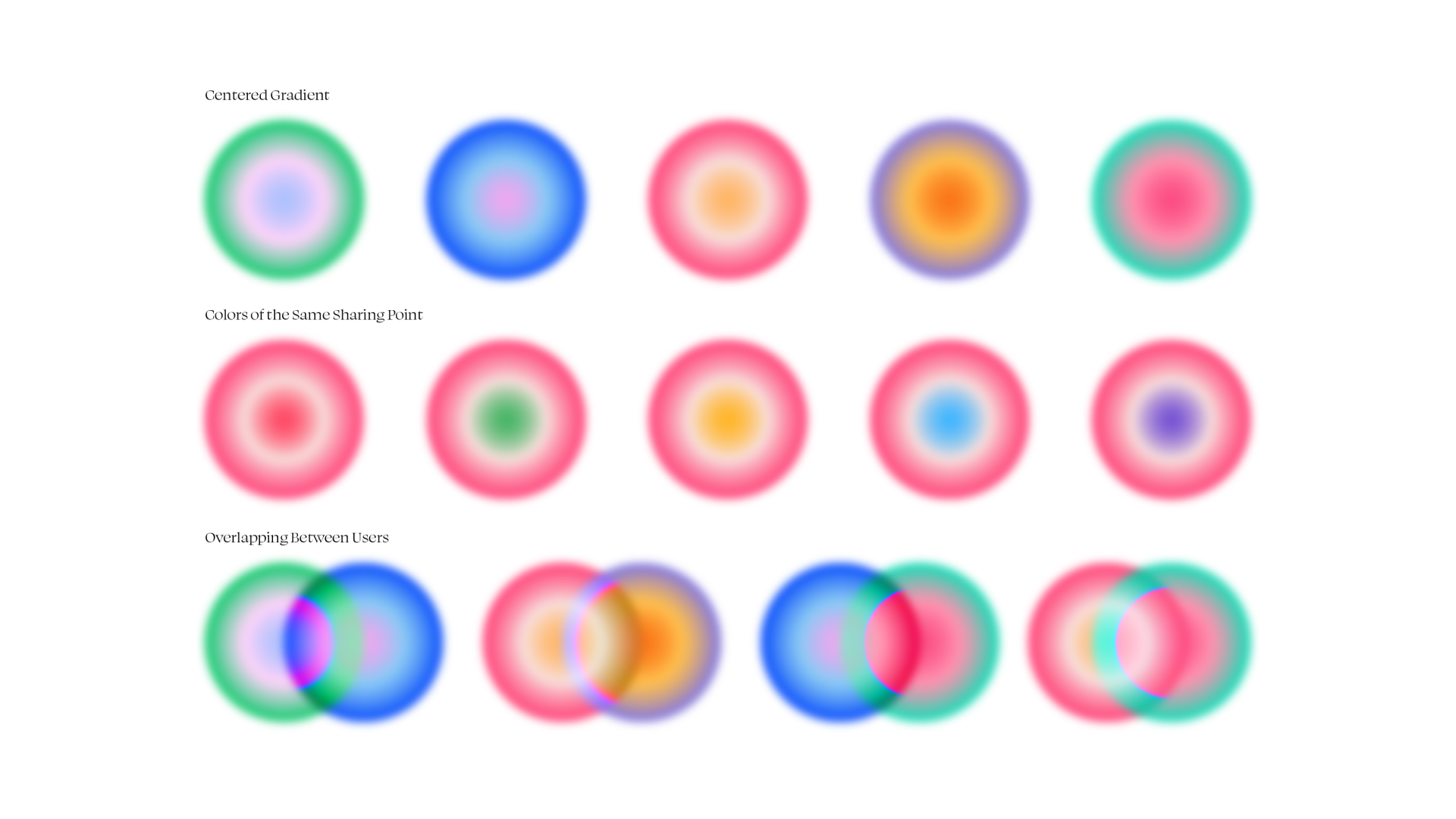 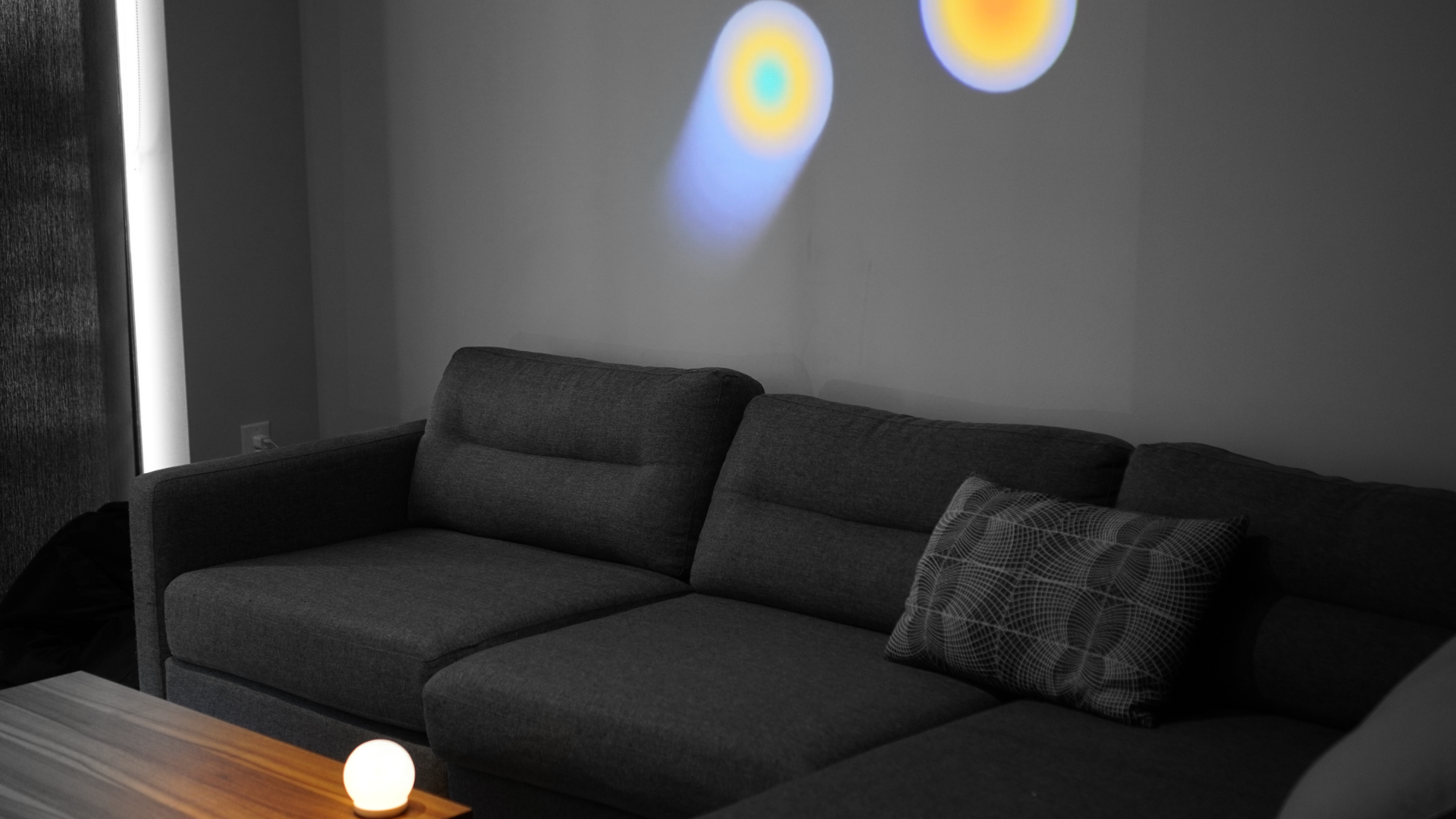 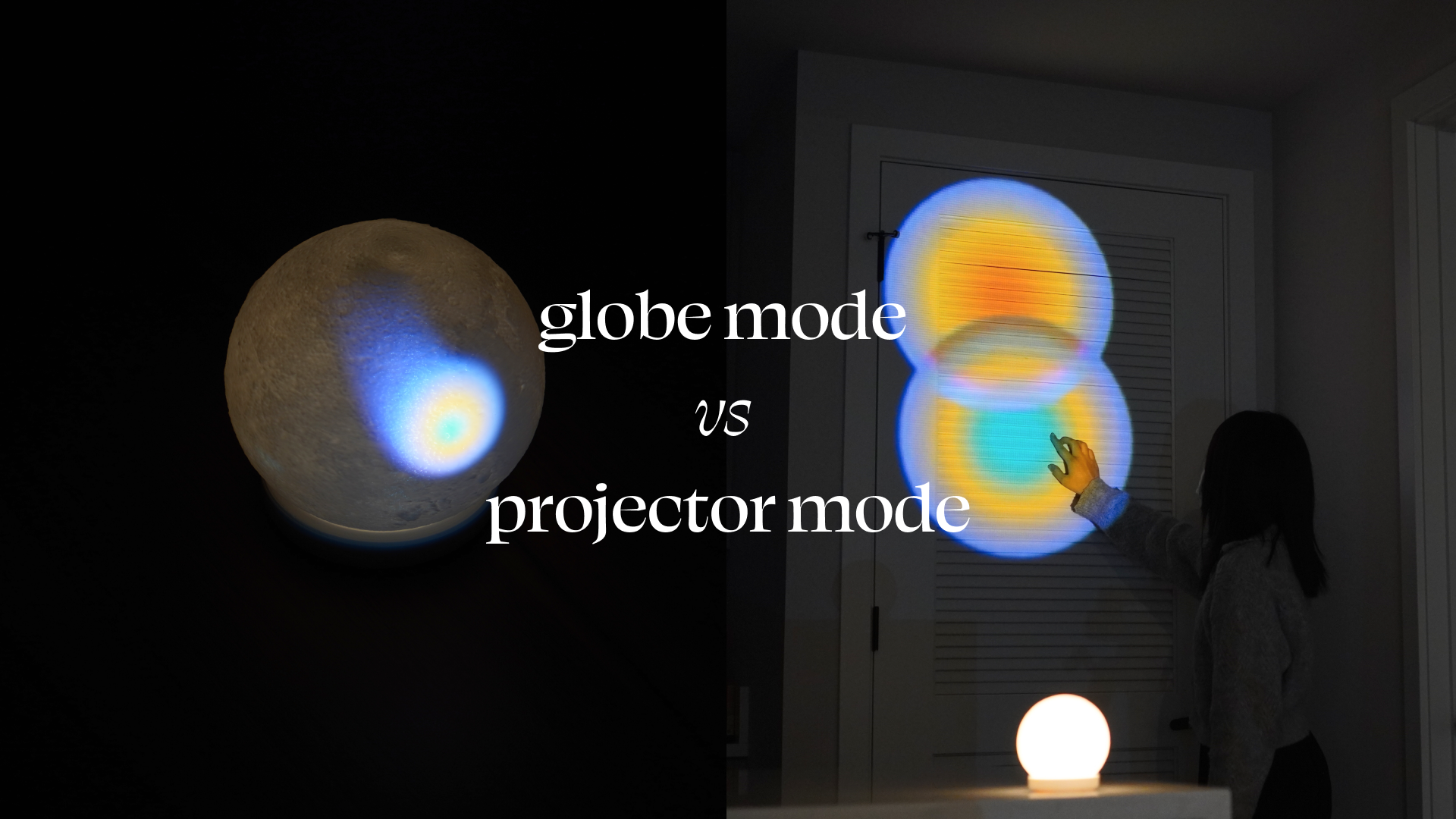 Households can have as many projectors as they would like — each can be connected to varying sharing points. 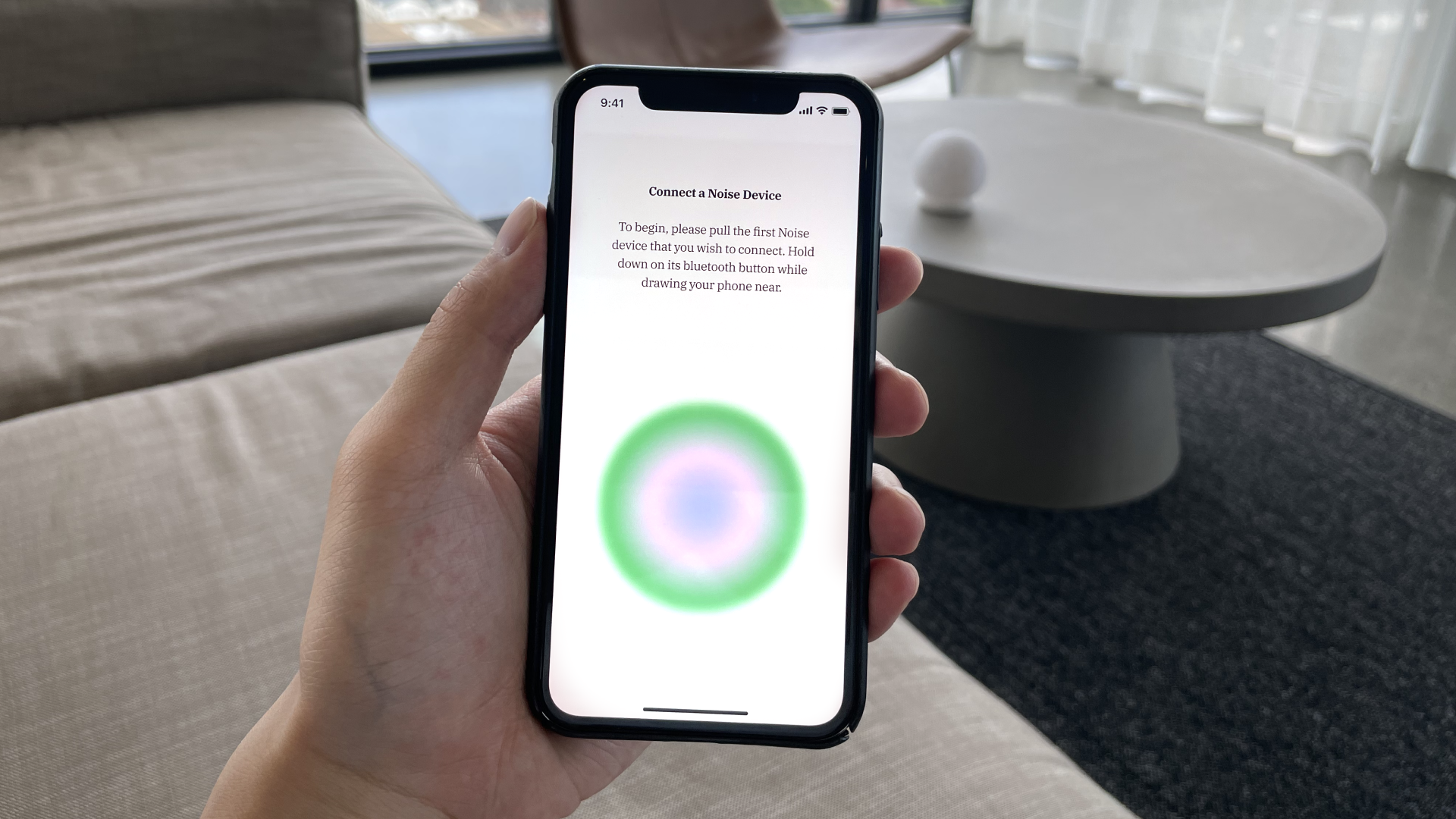 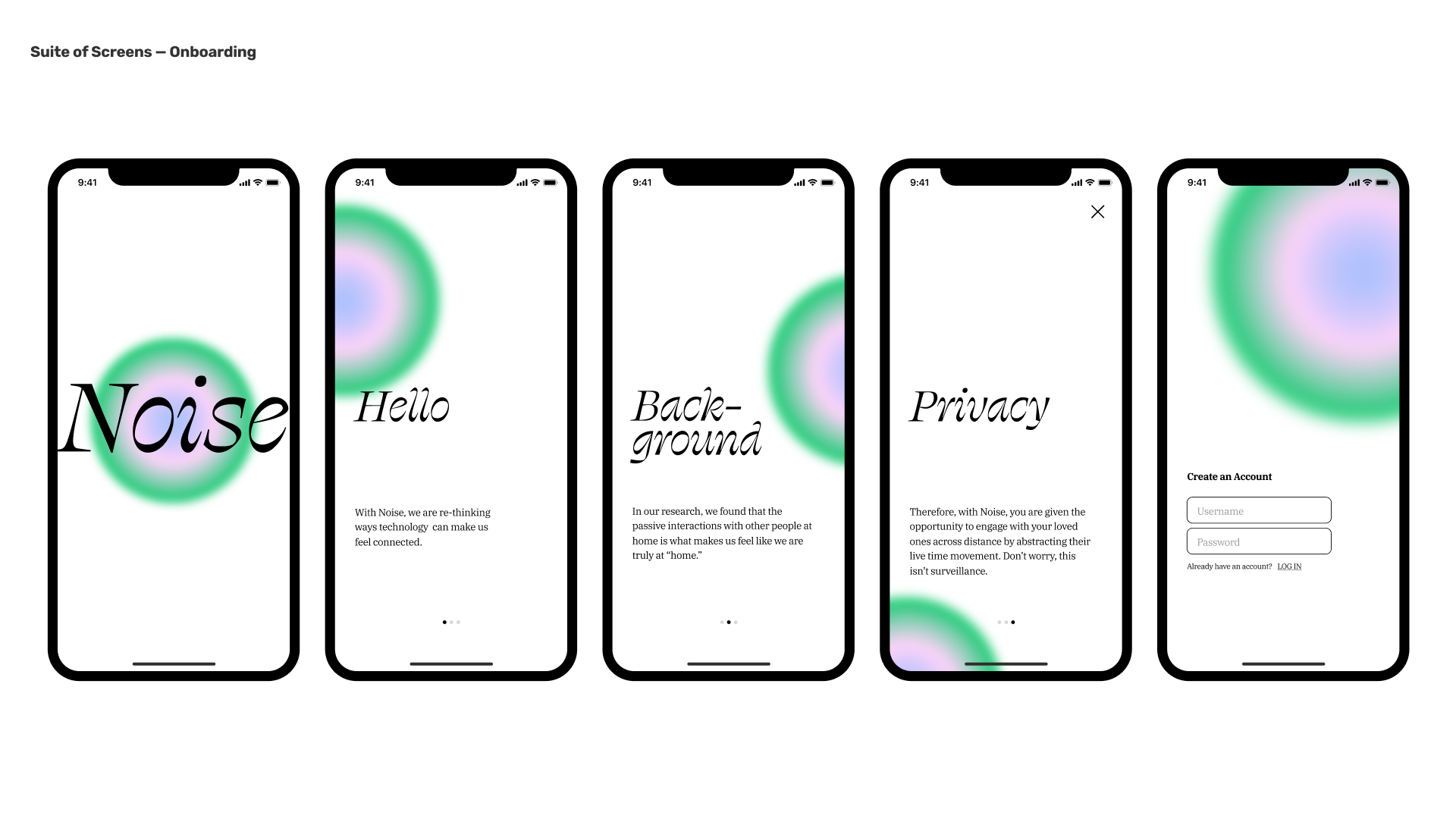 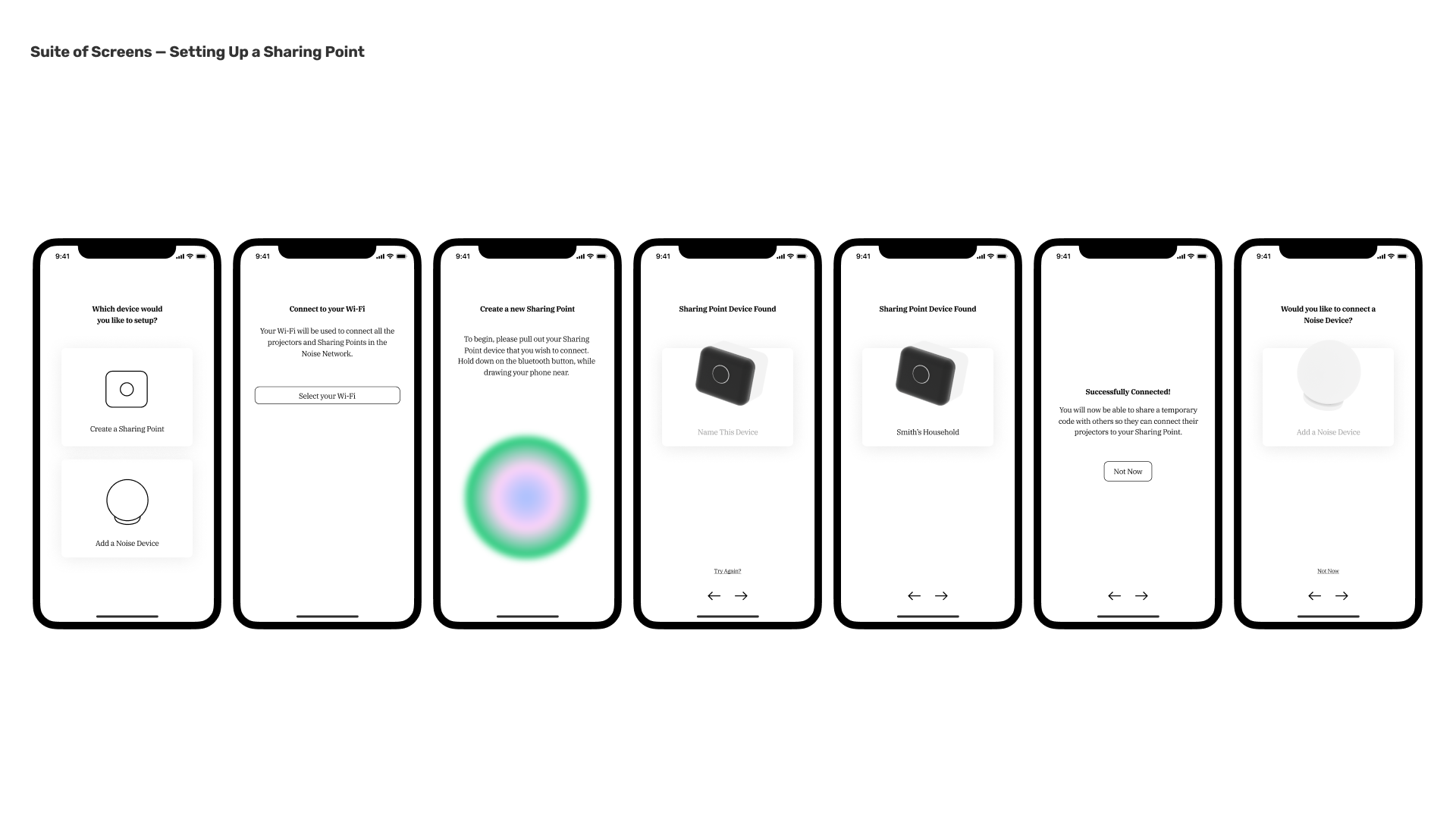 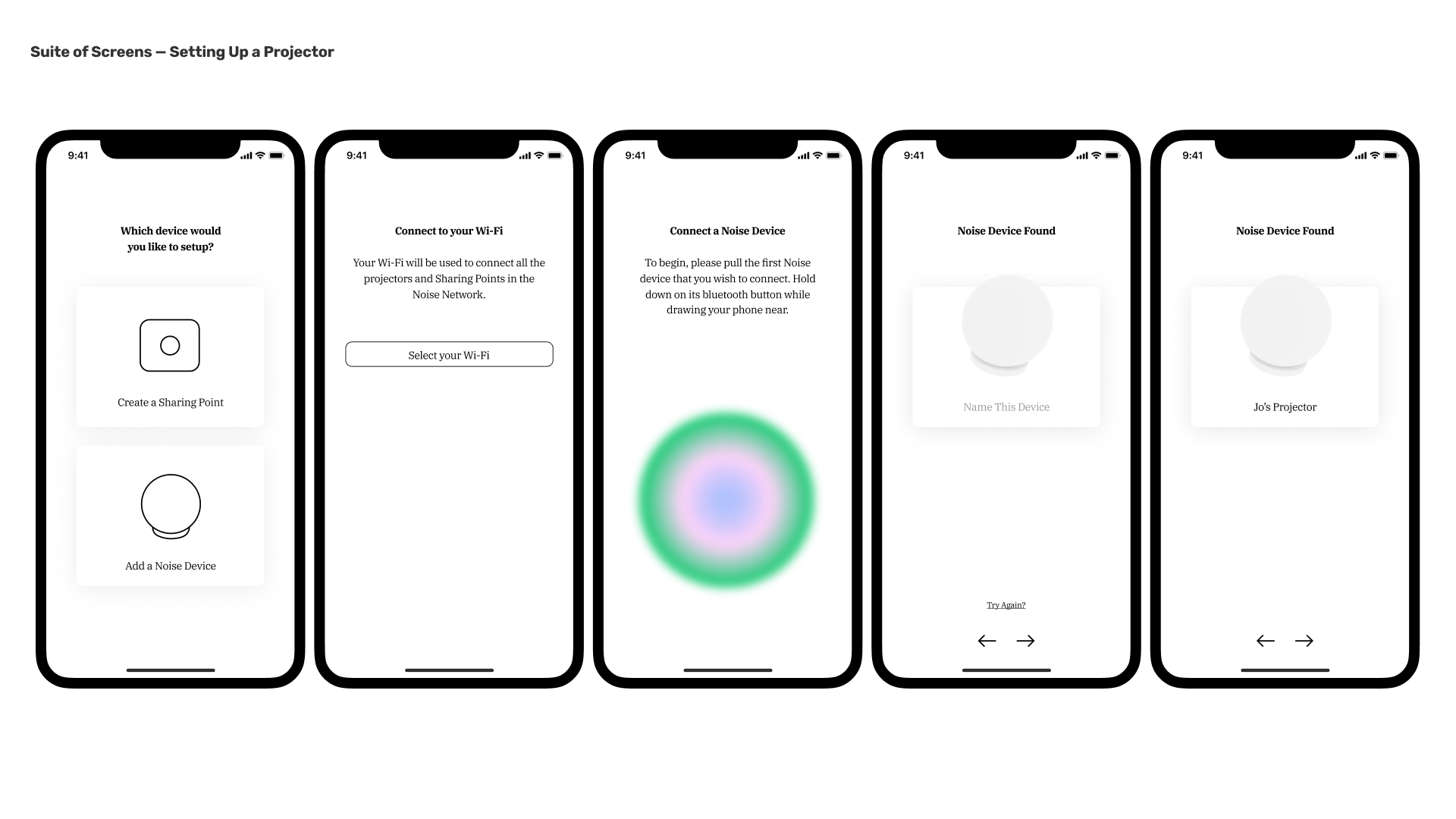 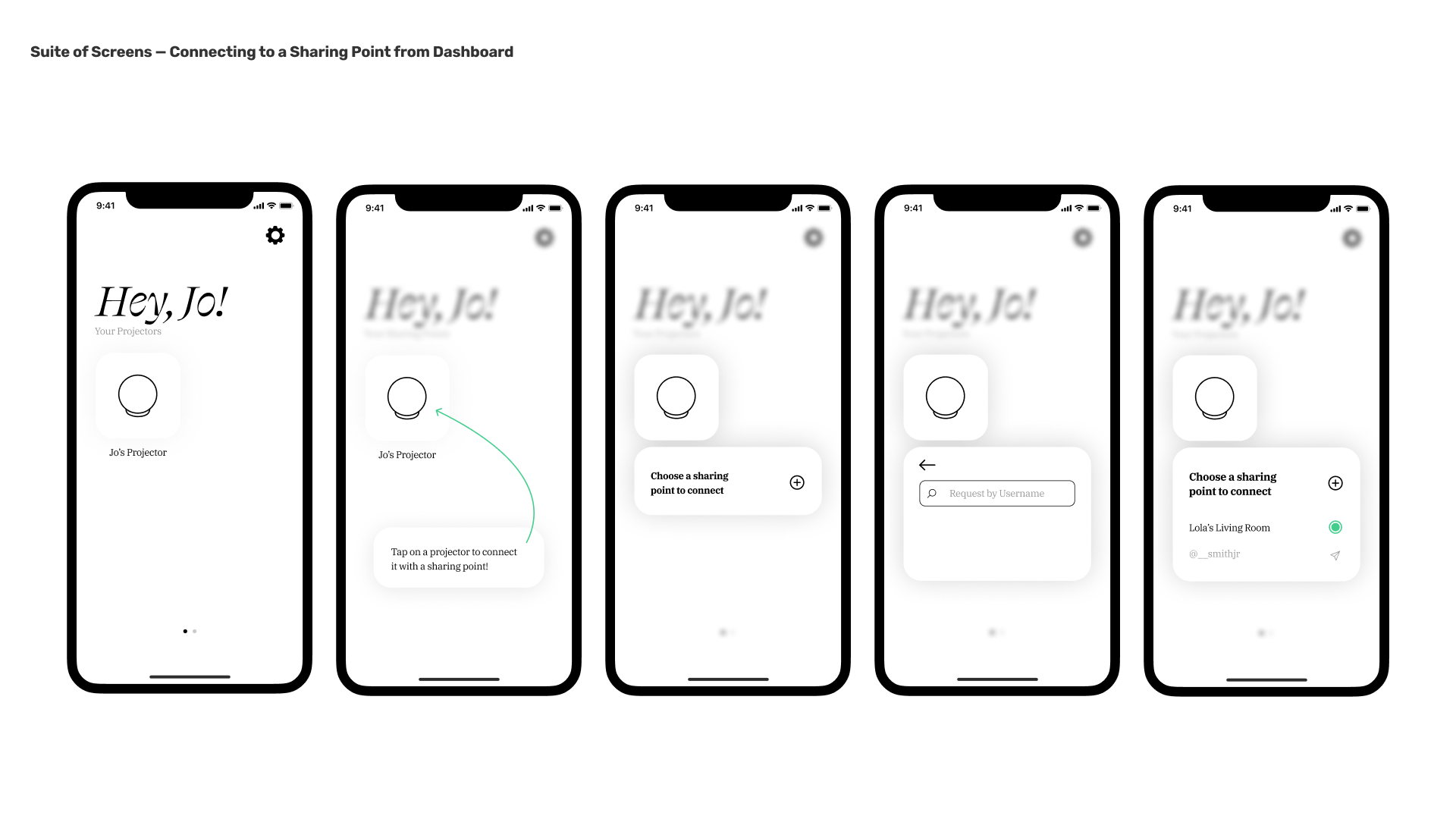 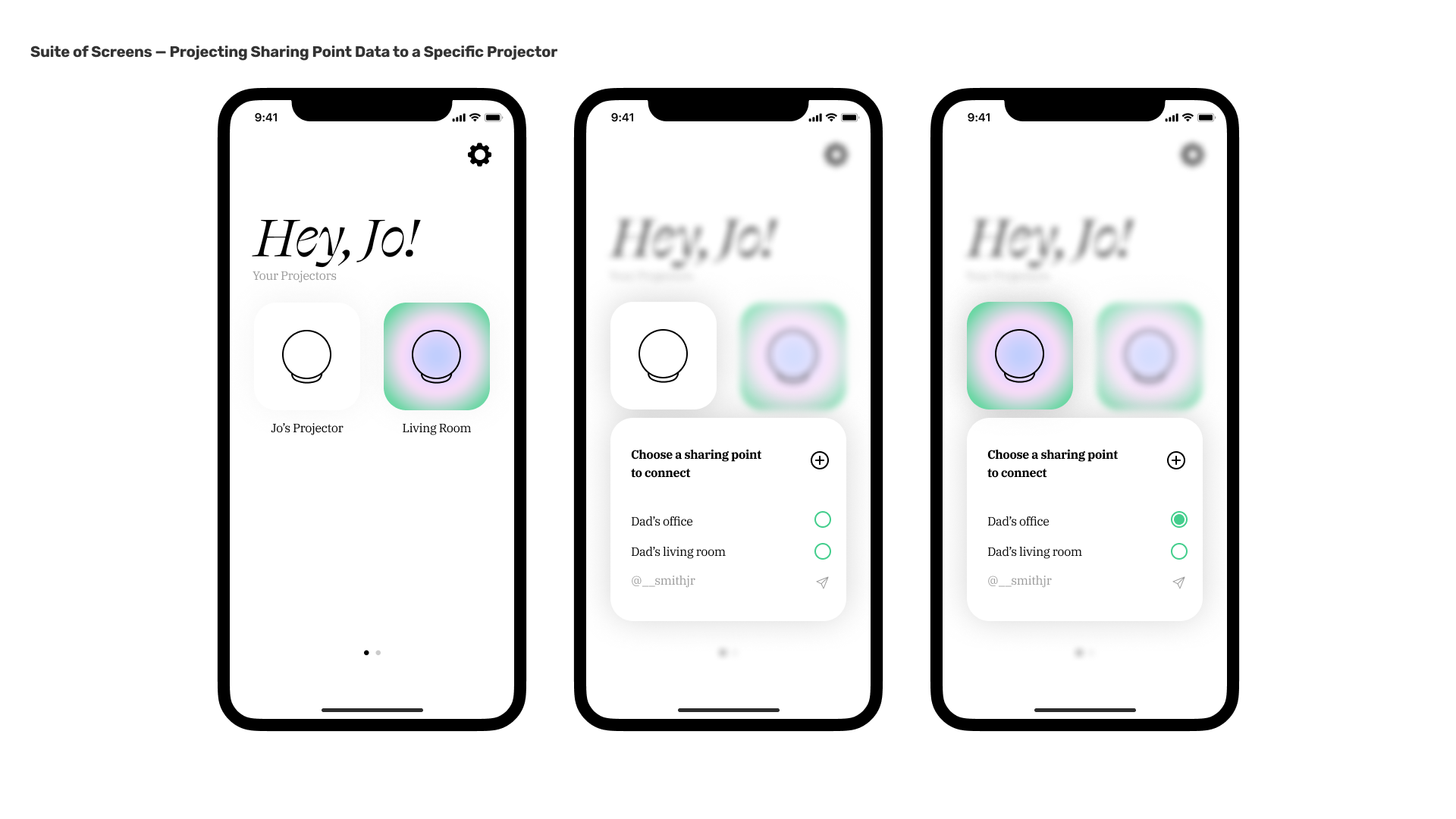 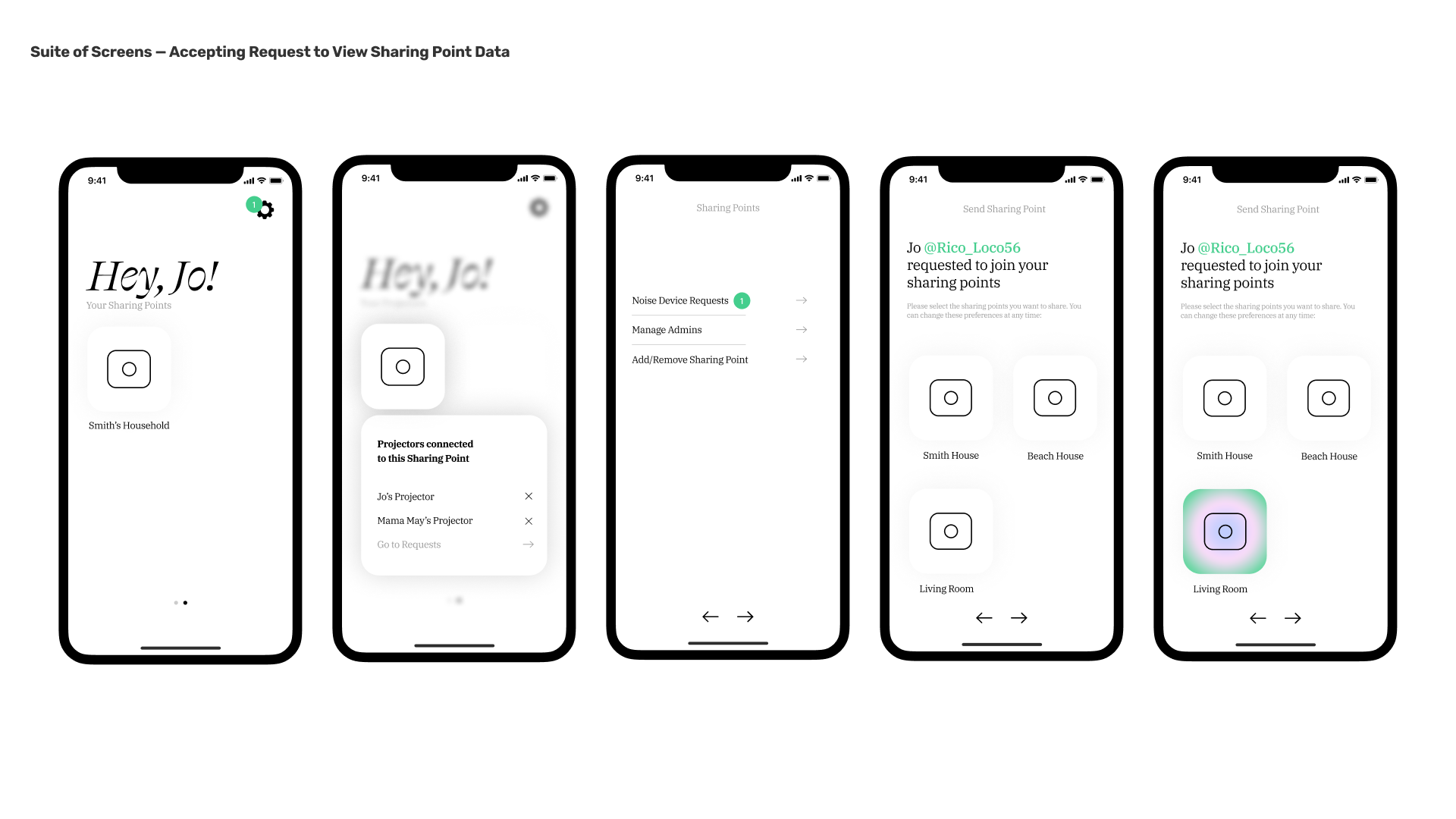 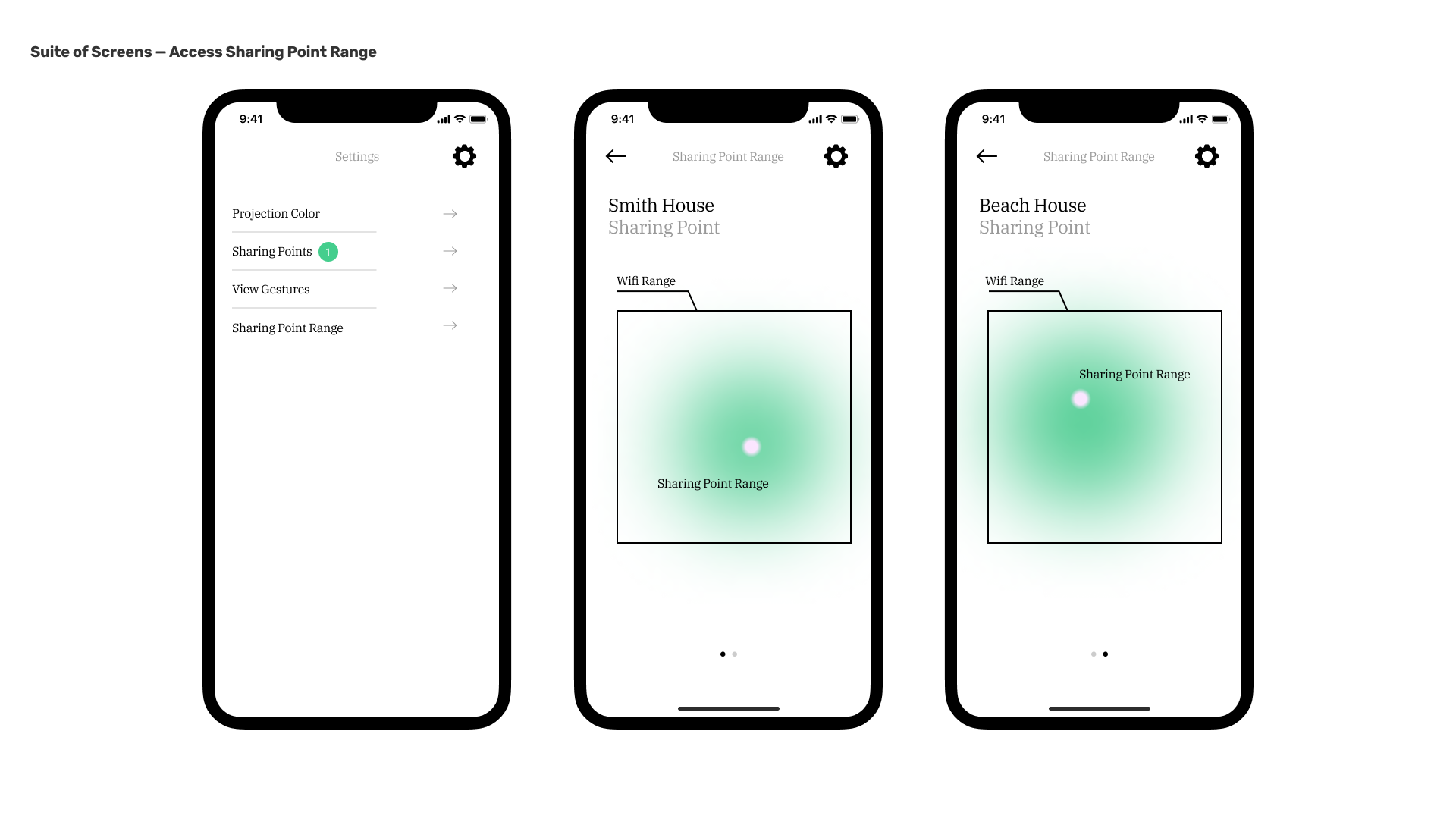 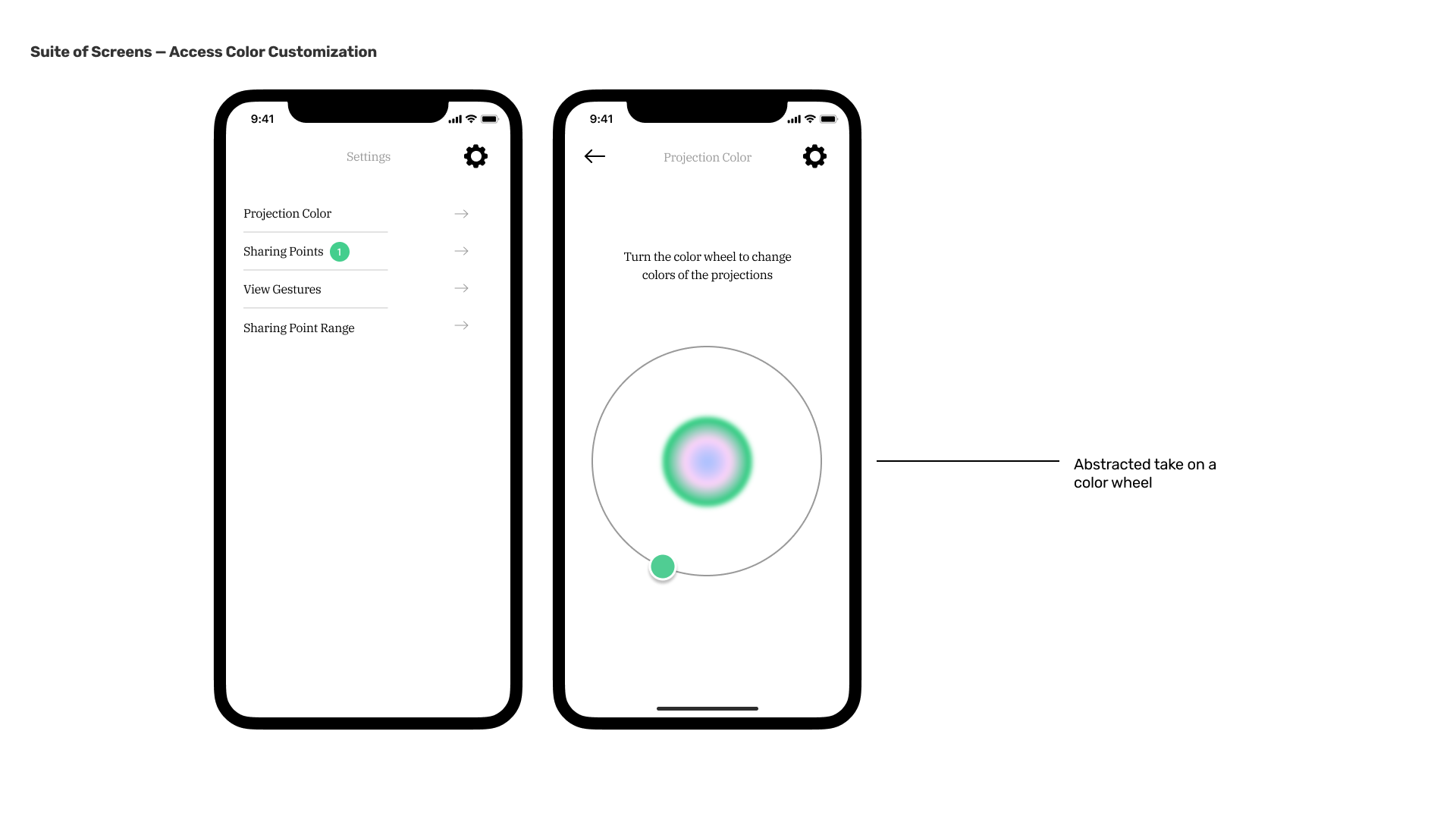 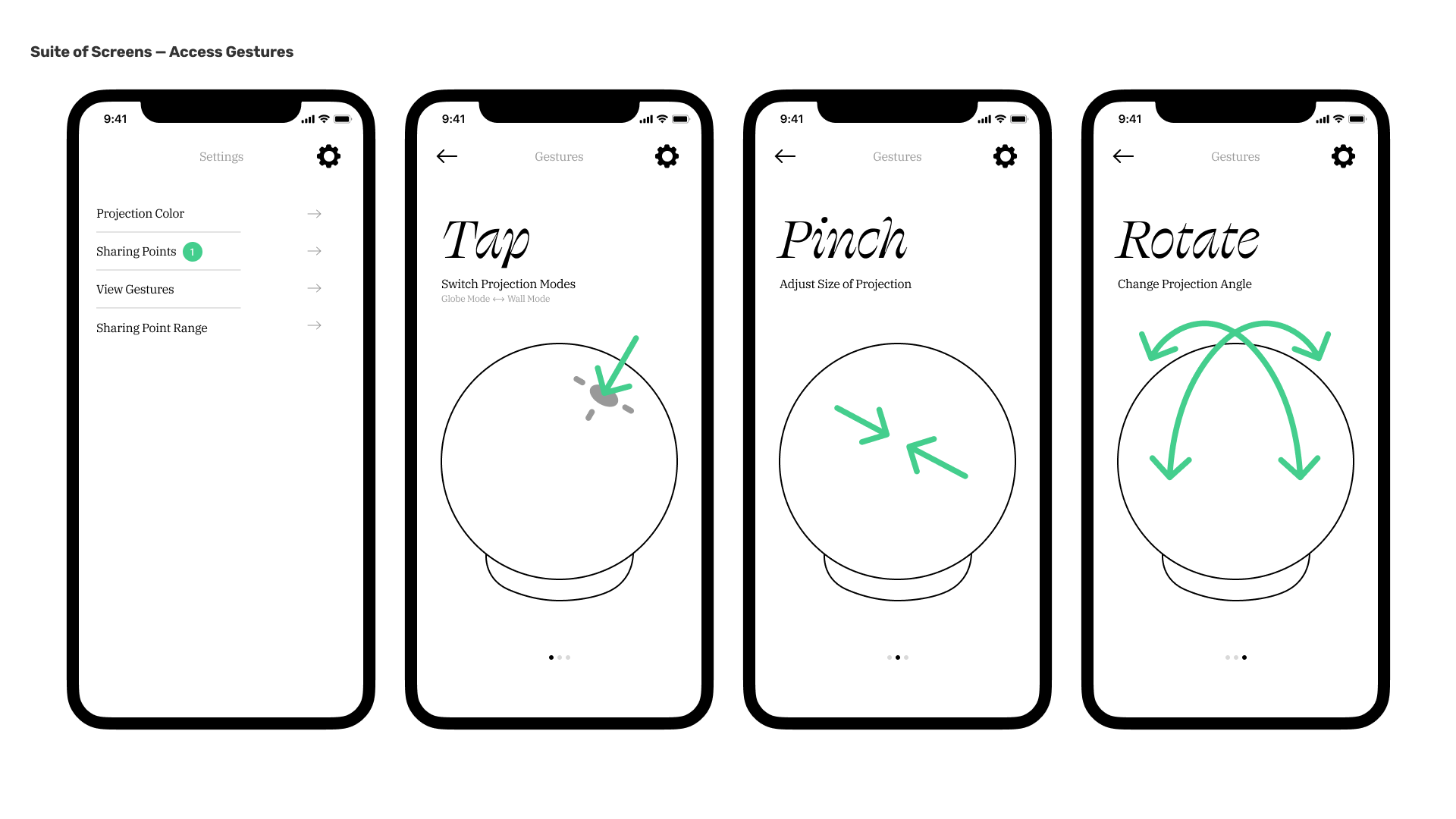 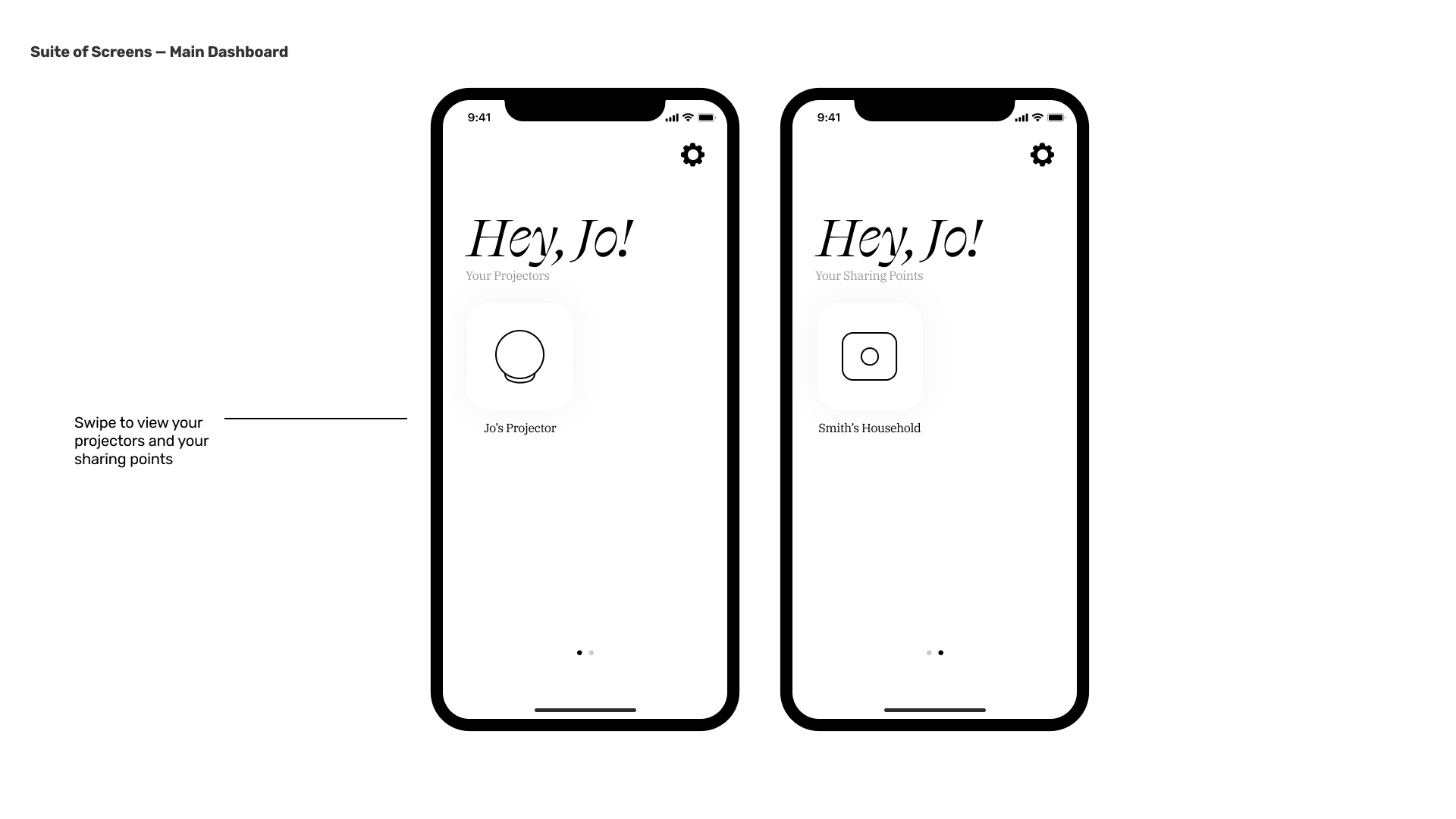 As we started to wireframe the app screens, we realized how difficult it was to discuss user flows without having set names for each component of our system. By creating that mental mind map of the locations of each device, it became clearer the relationships between devices, users, and households.

Even simply giving the motion detector a name of "Sharing Point" helped us as a team describe our concept to others and eventually the users who would be setting up the devices.

We spent days trying to figure out a simple and intuitive mind map of a network of devices across multiple households. We created image collages and diagrams to visualize ideas during our remote team meetings.

As a team we ideated over 60 concepts in forms of sketches. Nearly every initial idea was impractical and unfeasible for the present day. By letting our imagination run wild, we were able to consider new possibilities technology could play in our everyday routines.